Direct synthesis of alcohols from olefins via reductive hydroformylation is important for various applications. Catalytic systems of rhodium in combination with tertiary amines are highly selective but have rarely been reported. Little is known about the role of tertiary amines or even if they act as ligands during the catalytic cycle. In this research, the role of the amine during those reactions was investigated in depth. As a model reaction, 1-octene was converted to 1-nonanol using a molecular rhodium catalyst in combination with various trialkylamines. Identification of important parameters such as the amine concentration and the carbon monoxide partial pressure hint that there is a susceptible equilibrium for the catalytically active species. A Tolman-like map was created in which the steric bulkiness and the basicity of employed amines was compared to the hydrogenation activity of the resulting reaction system. A clear dependency on steric and electronic constraints was found, which is typical for metal bound ligands. The nature of the catalyst was intensively studied via 13C- and 103Rh-NMR during which the equilibrium of several anionic rhodium species was identified. High pressure in situ 1H NMR showed the presence of two major hydride species during the reaction. The equilibrium of those hydrides is heavily influenced by the nature of the applied amine indicating that it is essential for the hydride formation. Complementary in situ IR-experiments confirmed the formation of anionic rhodium species in presence of triethylamine with [Rh(CO)4]− being the major rhodium-carbonyl species. 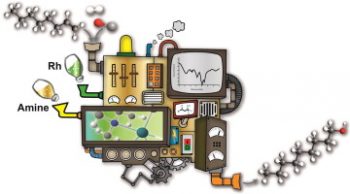